Landmark publication from 1987, including the “first e-book” by Immatrix Publications , organized and published by Andreas Müller-Pohle and Volker Rapsch in close collaboration with Vilém Flusser. The Essay “Hat Schreiben Zukünft” was published in book form and importantly also as DOS Floppies designed with advanced interactive functionalities and sound effects. 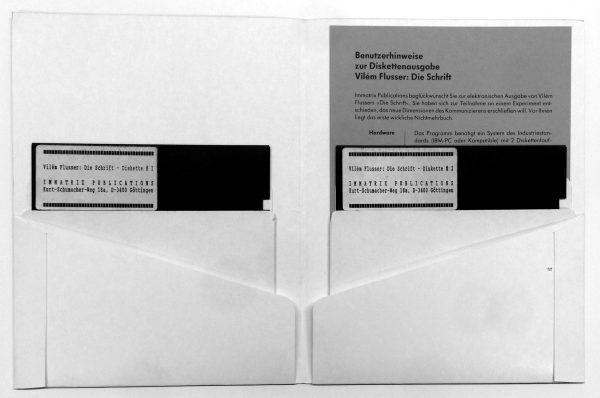 Andreas Müller-Pohle recounts: “Vilém Flusser's essay “die Schrift” is not only about writing, it calls writing itself into question through writing. Originally we had discussed a traditional printed book for publication, the idea for an electronic edition in my exchanges with Volker Rapsch, with whom I founded Immatrix Publications in 1986. Flusser liked this new idea and contributed a new “postscript” for the electronic edition. In the postscript (literally “after writing”) Flusser proposes the reader can either encounter the electronic publication as a “no-longer-book” (nichtmehrbuch) or as a “also-still-book” (nochimmerbuch) - to indicate that the reader could engage with the publication in dialogue instead of simply reading it off the screen. Therein lay the whole explosiveness of this project: it allowed the reader not only apprehend text as the result of a writing process, but it permitted text to become a process itself. This essay pointed towards a new culture of writing, and fortunately there was a technology - primitive from today's point of view - with which the experiment could be attempted concretely.” (from “Ein Gespräch zwischen Andreas Müller-Pohle (European Photography, Immatrix Publications) und Daniel Irrgang (Vilém Flusser Archiv) im August 2015.) (trans. B. Gottlieb)

Die Schrift was originally restored by Baruch Gottlieb and Philipp Tögel in preparation for the exhibition BODENLOS: Vilém Flusser und die Künste at ZKM in 2015. During this time Gottlieb was able to use some funding to work with Dragan Espenscheid to produce an emulation of the work which could be accessible on contmeporary browsers and devices. Thanks to a DAAD Grant for a Flusser SummerSchool in 2020, Flusser-club was able to re-implement this emulation with Dragan Espenschied and make it available to all interested. This Emulation is, at present, not complete. The function keys do not work and the sound effects are not audible. It is made available now to allow for researchers to access it in a form approximating the original. .